ATT gets exclusive rights to use the iPhone on it’s network (at least for now). The iPhone does exceptionally well, even taking customers from other networks, even despite some of those customers previously moving away from ATT, even getting fresh new cell phone users as customers just because Apple finally made the iPod phone.

Apple begins to use advertising for it’s phone which promote all the apps you can download onto the phone. If you want it, do it, play it, love it, or hate it: there’s an app for that.

Clever… and I have ATT.

Click on the map to see one of the commercials. Each commercial states the maps being shown are showing 3G coverage. To see if ATT is right – that the Verizon map shows all coverage while the ATT map shows only 3G – I went to the websites and took a look at their coverage maps. Here is ATT’s coverage map. Oranges are good quality service while blue is 3G network coverage: 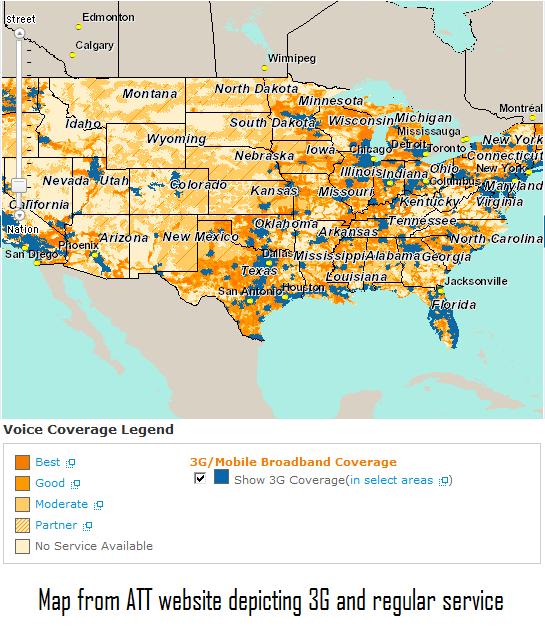 At first you notice that the blue areas (the 3G coverage) resembles that of the Verizon commercial. If you look closer however, you’d notice the coverage area of the ATT network is nearly the same as that of Verizon’s 3G network from the commercials map. But what does Verizon’s website say it’s coverage looks like? Here it is: 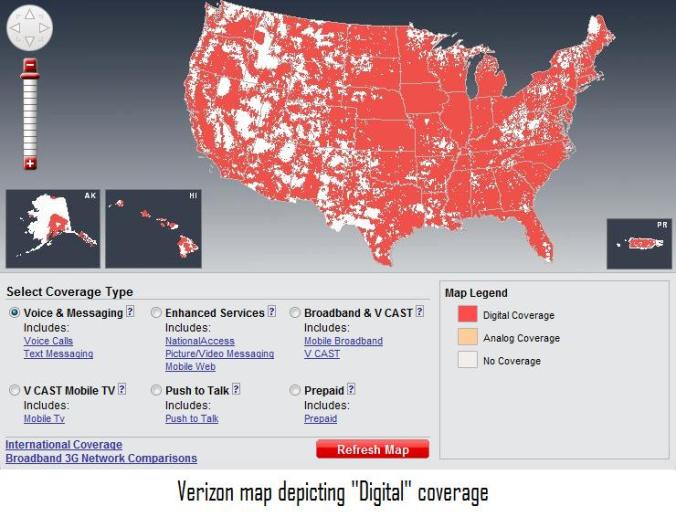 This is Verizon’s coverage map for “digital” service. Digital meaning regular service. Looks a lot like the map from the commercial. However, this is not Verizon’s 3G coverage map. That map is below:

This is the 3G coverage map, also know as “broadband” coverage. Seems to be almost the same as the Verizon map from the commercial. Yet, with all the “enhanced” and “extended” services also shown on Verizon’s map, it’s really hard to tell… so let’s get rid of them.

I did this with GIMP and didn’t waste my time trying to be perfect, but here is the map with only the blue – Verizon broadband/3G coverage. It’s still pretty close, but it does show spots where 3G would not be available like the map from the commercial says. So, it is possible that Verizon placed their entire map against ATT’s 3G map in order to make themselves look better.

Even still, do you think ATT lost market share because of this commercial? If anything, people would be getting ready to invest in networks which will be carrying the new Android based phones, which ATT currently does not offer (because they have the iPhone).  Do you think ATT is right in suing Verizon for purposely comapring two different maps as if they portrayed the same data?

In conclusion, I have too much time on my hands. But that doesn’t change the fact that Verizon should have used the propper data for their commercial.

Are you Digg'n it? Pass it along!

This site uses Akismet to reduce spam. Learn how your comment data is processed.