I was browsing through my Instagram feed for, like, the hundredth time today. I quickly realized I had seen everything in it about a dozen times.

“You need to follow more people,” I said to myself.

So, I clicked on the discover button to see what else is out there. Nothing great, and most not even good. That’s when I found a post from a Christian IG account about NASA proving the Bible right…

What? You missed that breaking story on CNN as well? Never fear. There was no story, because NASA didn’t prove the Bible right, because the story is a hoax.

The legitimacy of the story did not, however, deter people from praising Jesus. Nor did it deter people from calling the Jesus lovers “idiots.” I wouldn’t call it an argument because, well, it’s IG… you more or less like a picture, leave a comment maybe, and then move on to the next of millions of pictures asking for a double-tap. But there were a few (what I would call, but only because they have no other reason to be on this account commenting if they weren’t) trolls. Seriously, I don’t understand where these people come from. It’s as if they are browsing through IG and come upon a Christian picture. Then think to themselves, “let’s see how many reasons I can come up with that this picture is pure fantasy elves and fairy nonsense…”

I thought, if you don’t have anything nice to say… 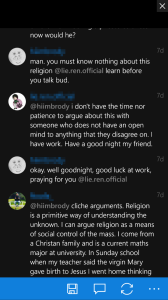 Whatever. They were there, and that’s where I saw this (pictured). It really doesn’t make much sense. I felt so strongly at what I’m going to pick it apart for that I had to screenshot it. This person states they don’t “have the time nor patience to argue about this with someone who does not have an open mind to anything they disagree on.” Which sounds good at first. Until you realize that he was basically saying religion is dumb, science is fact, everyone who believes otherwise is an idiot. If I held the same principle about who I argued with he, by his own definition, would be someone I would avoid.

I think these people misuse the word “argue.” To argue is really just making statements that either support your side or undermine the other side. You can say whatever you want. To debate is to prove that your side is the right side. You do this with facts. If the other guy’s facts are better, more compelling, or more believable, then there’s a good chance that he is right. In that case, you would be a fool for not joining him. In a debate, you can concede defeat. You keep an open mind because, after all, you very well could be wrong.

In essence what I’m saying is this:  if you won’t argue with someone because they won’t keep an open mind you need to make sure you yourself are keeping an open mind. Or else, you are actually calling yourself a hypocrite. 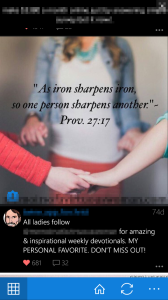 Back to the discovery of IG… many of the other posts on this account were very good, uplifting, and contemplative. I really liked this one (pictured).

“As iron sharpens iron, so one person sharpens another.” – Proverbs 27:17

But…  I don’t know that much about biblical times… but did they actually sharpen swords with… other swords? I’m pretty sure I’ve seen grinding wheels in historical films before. And I’m pretty sure the Japanese never sharpened their katana with other katana. You don’t sharpen blades with other blades, you use a sharpening stone-

(At least that’s how it sounded in my head… if you can picture the sound the word “REVELATION!” makes… is it “picture” a sound? Hear the sound? Imagine- it’s “imagine the sound.” I knew I’d get there.)

I read this passage and then quickly had a brief epiphany. You may not actually sharpen blades with other blades, or solid blocks of iron, or what ever this passage actually means. But if it rather said, “…stone sharpens iron…” then I actually know what that means, now at least.

Think of stone. It’s hard. It’s unmoving. It just sits there weathering away. If you call someone hardheaded you could say they were like stone. They will sit there and continue to be hardheaded, repeating the same thing over and over again. If unchanging, they will eventually weather away.

And as for you? It’s only by coming into contact with (and no I do not mean beating the daylights out of) this hardheaded person that you will get sharper. As long as you remember that you’re a blade, and not a hammer.

So like with our guy above, by talking with him and sharing information you have about Jesus, God, and the Bible you can sharpen your knowledge, wisdom, and wits. You can listen to him and hear what he has to say. Then say a little prayer for guidance, and tell him what the Holy Spirit says he needs to hear. Just don’t forget: you’re a blade, not a hammer. If you start bludgeoning the guy you will only make yourself duller. You cannot defeat the stone, and more to the point, you don’t want to defeat him. You want to give him the information he needs to make a more informative decision. If he chooses to continue believing you are an arrogant idiot, trapped in the past by a dusty old book, then that’s his choice. But beating him over the head with that dust book will only push him farther away from God even faster.

And yes. I am not blind.

If I am not careful this could all apply to me. I could become a stone; unmoving and unchanging, suffering from the weathering of ignorance and foolishness. I could just as easily be that IG poster from above. I could decide not to talk to you because you have made up your mind and will not listen to a word I say. I could decide that I am right and everyone who doesn’t believe what I believe is a fool.

On the other hand…

I could be the sharpening stone that gradually sharpens the blade that is the people who need a little help fighting the good fight. I, little old rock, could actually wear away the dings and dullness of the blade making it better able to face the world.

Or the original passage could be easily explained as well: stick with people, and they will help you grow.

Or time could freeze and the world as we know it could be locked in a 7th dimension paradox!

But seriously, don’t get so hardheaded that you think you should only talk to people who’s mind you can change. And quit arguing with everybody anyway!

“Evil preys on the weak… because it fears the strong.”

P.S. – it’s paradoxes. I know how to work a dictionary.

Are you Digg'n it? Pass it along!

This site uses Akismet to reduce spam. Learn how your comment data is processed.